Controlling Costs, or Leaving Money on the Table?

I am the CFO of one of the most long-lived mainframe software companies on the planet. The company has been around for 40+ years, it has been profitable for almost all of that time, and its products are running in the mainframe datacenters of many of the world’s largest banks, insurers, and credit card companies. With all of that street-cred, you’d think that our sales people and business development managers and account executives would have a pretty easy job of it – just sit by the phone and take orders, right? While we’re doing just fine financially, thank you very much, this is a war for us.  Why is that? Well, there’s a bit of a story to tell…

It should be easy to sell mainframe products

Let me draw a couple of pictures for you—This first picture is very promising; it illustrates how the mainframe is responsible for a huge chunk of the worlds transaction processing. Most of the world’s largest banks, insurers and other financial institutions process their transactions on mainframe systems. Further to that, the mainframe business is actually growing—in the sense that existing mainframe customers are continually growing their mainframe budgets, and increasing the workloads being run on their mainframe systems. This has been borne out in survey after survey—it is a real reflection of mainframe workload growth in key business verticals. And that is good news for mainframe ISVs—you would think. 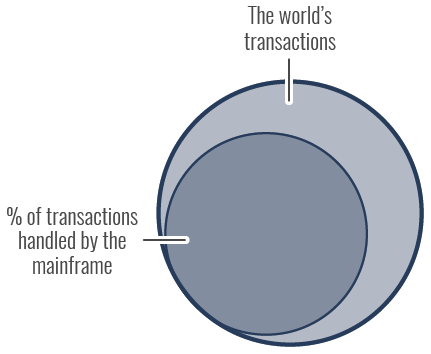 But it’s not easy; quite the contrary

Unfortunately, it’s more complicated than that. If you can manage to get a new sale in the mainframe world, you’re doing well—mainframe hardware and software from IBM are big-dollar items, and the income resulting from those sales are reflected in public information in IBM’s annual reports. The same is true for the ISVs doing business in the mainframe world—there is quite a large ecosystem in play in that space.  Is it because of the high-dollar cost of a new sale? No, that isn’t the problem.

But if you’re looking for new mainframe software sales to new customers, boy, you have an uphill battle on your hands. This second picture illustrates the challenge. Where the mainframe has a huge footprint on the business landscape, the business and IT personnel focusing on the mainframe represent a tiny percentage of the total number of business and IT professionals out there. So tiny, in fact, that you can hardly see them in this graph! How can this possibly be??

Well, there are several reasons for that, but I want to show you just one more picture. And believe it or not, it makes things even worse! This third picture illustrates the equally small percentage of mainframe-focused business and IT personnel who are actually involved in new and transformational change initiatives. This is a very unique relationship; it’s not like this in many other type of IT environments, or many other business environments, for that matter. 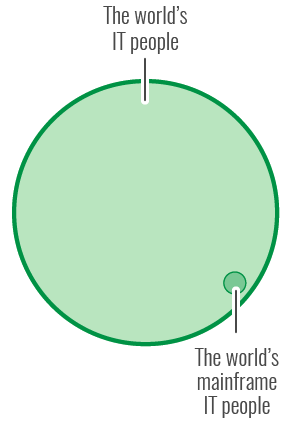 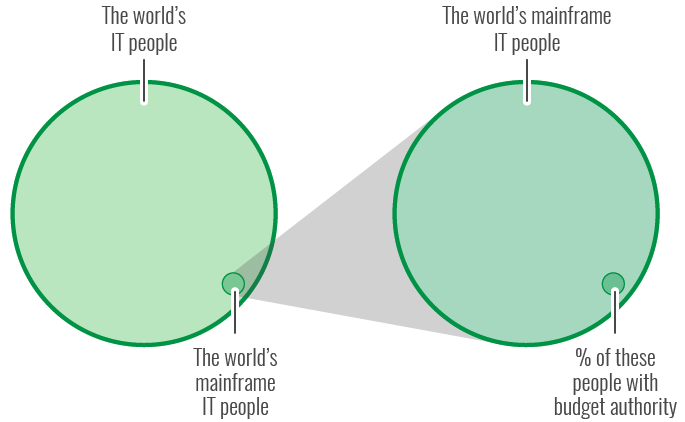 So why the difference? Well, it’s a long story, but in the end, it’s because the mainframe, and all of the business and IT folks associated with it, are encased in a giant silo. Budgets, personnel and anything else in that silo are strictly controlled. Typically, no new spending is allowed over that which is completely necessary for maintaining the status quo. It is very difficult to hire new personnel or even to replace attrition, and spending on new software is very difficult to justify.

So, as you can see, sales folks are between a rock and a hard place – in our company, they’re responsible for the sales of highly successful products, but can find very few new potential customers; mostly window shoppers. Well, too bad, that’s our problem, you might say. And that’s fair enough, but what does it say about the state of IT in big business today? Think about this – the computing platform responsible for as much as 75% of the revenue for the biggest financial concerns, is being virtually ignored.

That may be an overstatement, but the reality is that for most IT organizations, the mainframe is housed within an air-tight silo – and that’s not an overstatement. Within the silo the mainframe is accompanied by the mainframe-specific IT team – programmers, analysts, DBAs, sysadmins, capacity planners, QA and support specialists, consultants and a variety of business practitioners and managers. And in there, budget is very strictly controlled. There is budget for monthly operations costs and personnel costs, and when increased business demands it, systems upgrade costs. Beyond that, there is budget for little else. Personnel attrition is often not addressed, new hires are almost unheard of, and new projects are extremely rare. In fact, there is typically no appetite for new software products – even if those new software products can be shown to help reduce costs.

Outside of the silo are the rest of the IT organization – about 90% of the people (or more), including the upper management – and this area commands 90% of the IT HR budget. This is where the new projects are allowed to happen, and they are typically restricted to cloud or distributed server platforms. This is also where people can get noticed, and where careers can be fast-tracked.

DevOps outside the silo

Most of these are excellent excuses for the two sides of the IT house to stay apart. But an excuse isn’t actually the same thing as a good reason, and unfortunately, there is no good reason for IT departments within the same company to be artificially separated. What it does, is ensure poor internal communication, and foster resentment. Let’s face it; is it ever a good thing when the left hand doesn’t know what the right hand is doing? Nope!

This problem particularly hits home for me, being the CFO of an IT company, and having first-hand knowledge of a similar silo problem that exists in most companies – both IT and Finance toil away within their separate silos. IT needs Finance and vice-versa, but they don’t speak the same language. In fact, for smooth operation between IT and Finance today, you really need an IT evangelist within Finance, and a finance evangelist in IT – without this relationship, it can be difficult to get funding for new IT projects in large companies.  Having IT divided into two separate silos just exacerbates the problem.

So what’s the answer?

What large companies need to do is to get their mainframe systems and people out of their silo, and integrate them into the DevOps process. They need to think of IT as one cohesive unit that manages a variety of platforms and IT and business expertise for the purpose of promoting the corporate bottom line. If there’s resistance to that idea, get a finance partner within the organization who can communicate and educate stake holders about how the bottom line is of prime importance within any organization.  Trust me, I’m a finance guy, and I can tell you that a CFO will help make this very clear to anyone in the org chart. In my view, the separation of IT into two camps does not make sense from a business perspective.

The mainframe is without question, the best platform on the planet for securely handling intense transaction processing like that experienced by the big banks and other financial institutions. It’s also the most cost-effective at those scales, something that can get lost in the cost-savings and cost-control discussions. New development typically takes place on cloud and distributed server platforms, and there’s nothing wrong with that – that’s where the millennial programmers are most comfortable (although the mainframe can handle that, too). The smart play is to use the platform that is best for the job – so if the mainframe is the best at a particular job, don’t hide it away – modernize it so that you can make the best possible impact on your company’s bottom line. Failing to do so is leaving money on the table, and no reasonable finance person would recommend that…